Frankly, Monday was my most stressful day on mission because most of the day was spent in a collision of where I have no gifting or deep interest. First, I only speak a few words of Spanish, and second, my “gifting” does not include carrying out planned activities with preteen girls. I love and whole-heartedly support girl empowerment and development, but I’m not one to be in the thick of playing games, doing hair and make-up, singing songs, and making crafts. You can find me [as I have done] hosting a girls’ weekend retreat involving conversation, education, and debate of challenging life questions. When you couple crafting with my language barrier, I was not only out of my element but struggled to keep mentally engaged. I hope I faked it well enough, but I’m not taking a survey.

I’d heard that the day before was a struggle for some women because of the girls’ behaviors and less than half spoke Spanish. This morning the CDA staff and mission team discussed whether the retreat would be called off for the girls. The consensus was that boundaries were now defined, consequences communicated, and the team had a detailed plan of engagement for the day. The girls’ retreat would press on! 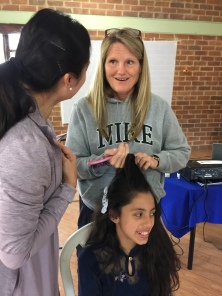 We showered the girls with love and the translators did a great job keeping everyone informed of what was going on. Near the end of the retreat, as the girls were creating their “positive word” shirts, each where given the opportunity to go off in private with two of the mission women to ask for prayers.

I was privileged to hear Sally’s story which broke my heart. [Her name has been changed to protect her identity.] When we asked how we could pray for her, she immediately broke down sobbing. Sally shared her story of sexual abuse that started with her uncle. When Sally’s mother found out, she banished the uncle from their lives. Sally’s parents were divorced, her father lived hours away, and her mother had remarried many years ago and birthed another daughter. Her stepdad was sexually abusing her now. Despite Sally’s mother repeatedly asking her, she didn’t have the courage to tell her mother the truth. Sally didn’t want to ruin her mother’s happiness. She felt she had no one to tell that could help her. She could not tell her father for fear he would kill her stepfather. Sally could go live with her father but that would mean leaving behind all her friends. I felt helpless. We prayed for her to have the courage to make a decision that would take her out of the abuse: (1) tell her mother, or (2) go live with her father.

Sally’s story was the catalyst to remember my own childhood story of sexual abuse and how blessed I was that my story ended so differently. When I was ~ 11 years old, a friend’s father molested me. I had the courage to tell my mother, who protected me by avoiding this man at all costs. My incident was a one-time event and outside of the immediate family. With a country limited in child protection services and the abuse taking place by an immediate relative, I was at a loss for words to share with Sally. We prayed for peace during this demonic storm and for her stepfather to stop his abuse. 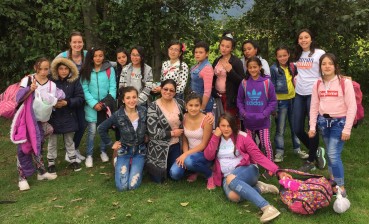 Tenjo House had an interesting history with its use as a temporary home for kids rescued from abusive situations. It was operated by CDA as part of their missional outreach. Pastor Carlos led its operations, and the goal was to eventually return kids to their families. When the government became involved, CDA was forced to close when they refused to drop its Christ-focused program.

Monday on mission was certainly an emotional day on many levels and much different than Sunday, when my primary focus was leadership training with the church staff. I took away several messages from my day with the girls:

Although this wasn’t the day I would have planned, I do love every day on mission because of how it stretches me, challenges me, and teaches me. I wouldn’t have changed this day.